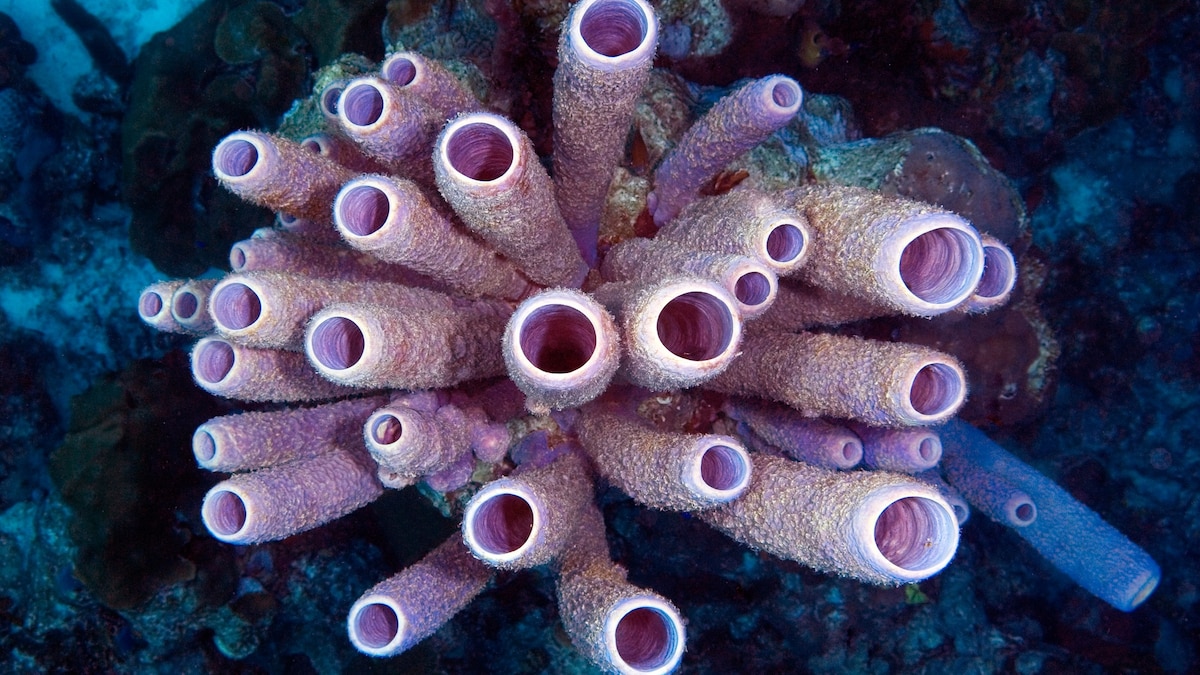 It had been more than 140 years since a Rio Grande siren—a slippery, two-legged, foot-long salamander protected by the state of Texas—had been found near Eagle Pass, a town on the United States-Mexico border. But in 2019, biologist Krista Ruppert, now a PhD student at Mississippi State University, realized she didn’t need a siren in hand to prove they were still there.

She just needed a pitcher of muddy water to filter.

At Eagle Pass, Ruppert found enough environmental DNA—trace genetic material left behind as organisms crawl, swim, or flap their way through life—to establish that the elusive amphibians still live in the area, at the far western edge of their known range.

In the last decade or so, environmental DNA, or eDNA, has revolutionized marine and aquatic research by allowing scientists to sample “an entire ecosystem” with a liter of water. Now, after a flurry of experiments on dry land in the past several years, eDNA has become biologists’ skeleton key. It’s a relatively cheap, noninvasive, and simple technique that can be modified to study any form of life, and it often requires less time and labor to employ than previous methods.

Here’s a sampling of the most surprising places scientists have found hidden DNA—from beaches to beetles’ bellies to the wind—and what these discoveries are teaching us.

Stop and swab the roses

In 2017, researchers from Aarhus University in Denmark went out on a limb—they plucked a bouquet of wildflowers from two Danish fields and popped them into a chemical bath to extract any DNA on their surface.

“We were actually really unsure as to whether this would even work,” says assistant biology professor Eva Egelyng Sigsgaard.

To their surprise, a single wild celery flower bore DNA from 25 species of insects, spiders, and other arthropods. On 56 blooms, they detected eDNA from at least 135 species with tremendous diversity, from a wealth of pollinators including moths and bees to predatory beetles.

“What is impressive here is that we get species that have a very short time span of interactions”—like the seconds a butterfly takes to slurp up nectar before flitting away—“to species that complete their entire life cycle on the flower,” such as aphids, says Philip Francis Thomsen, another Aarhus University associate biology professor who has researched eDNA for more than a decade.

Environmental DNA samples taken from flowers could provide much needed insight into a region or plant species’ most active pollinators. For example, scientists believe the contributions of moths and flies are dramatically underestimated and could be an important target for conservation efforts.

Pathogens in the sand

Florida’s white sand beaches are covered in eDNA—and not just from the tourists. A team of scientists from the University of Florida has recovered genetic material from the flipper prints left by individual loggerhead turtle hatchlings, weighing about as much as two quarters, making their way from the nest to the sea.

Further analysis of the sand samples demonstrated that eDNA can help researchers monitor not just species, but also the spread of disease.

The tiny tracks also contained eDNA from ChHV5, a virus that causes the debilitating cancerous growths of fibropapillomatosis in young turtles of many species. The discovery challenges the presiding theory that the disease is passed horizontally, either through the water column or between direct contact between juvenile turtles.

“Detecting the virus in a brand-new hatchling opens up a really big question as to whether vertical transmission” from mother to hatchling “is also at play,” says Jessica Farrell, a recent PhD graduate from the University of Florida and first author of the study.

That “would have a really big knock-on effect in terms of how we would try to mitigate this disease in the future,” she says.

At the height of the 2020 lockdowns, Christina Lynggaard, then a postdoc at the University of Copenhagen, used a variety of vacuums to suck up air at the Copenhagen Zoo. She and her advisor, Kristine Bohmann, an associate professor of molecular ecology, didn’t expect much—perhaps she’d pick up DNA from an okapi if she stood in the species’ stable, she thought.

But the results exceeded their wildest dreams. By filtering air at several sites across the zoo, Lynggaard ultimately detected 49 species of animals, some housed up to hundreds of yards away—birds, reptiles, mammals, even fish that were fed to predator species.

“We had goosebumps, tears in our eyes,” Bohmann says. “Lynggaard has shown something that can change the entire field of terrestrial vertebrate monitoring,” referring to backboned, land-dwelling animals.

Unbeknownst to Lynggaard, a near-identical study was being conducted simultaneously at a zoo in the United Kingdom. Their results echoed the Danish team’s, finding 25 species—including, delightfully, a wild Eurasian hedgehog that keepers regularly saw wandering zoo property.

The twin discoveries made for a watershed moment in eDNA history, but what they missed was almost as fascinating as what they caught. Some species were never detected, and an animal’s body size and the number of individuals didn’t always seem to have a bearing on how strong the reads were.

“When I was walking around the zoo, I had this idea that if I could smell an animal, I probably would be able to detect it,” says Beth Clare, assistant professor of biology at York University in Canada and leader of the UK-based study.

“I thought, if I’m smelling whatever it is—hormones, or pheromones, or the scent that they’re putting off—sure, there must be DNA being carried with those droplets.” But eDNA from the zoo’s most stinky resident, a maned wolf, evaded their filters.

Now, both teams are working to refine their techniques. Clare and colleagues have deployed four rounds of prototypes in naturalistic settings from Ontario to the tropics, she says, and are experimenting with passive collection (that is, filters without vacuums) of eDNA from dust.

“Our most interesting finding is that the material is not just accumulating at random,” she says. “When animals are active, they are detected, [and] when they go dormant so does the signal.”

These new findings, which are currently in review for publication, are a major relief to Clare and an auspicious sign for the future of airborne eDNA.

“One of the early concerns [was] that there would be no real signal—the ‘everything is everywhere’ risk,” she explains. “It has been suggested that wind would just move the DNA all around making it a homogeneous soup. Our data suggest the opposite.”

Population dynamics for the whale shark, an enigmatic giant that prefers the deep water in the open ocean and doesn’t need to surface for air, remain something of a mystery to scientists.

To learn about how different populations of the endangered sharks are related, scientists typically use hand spears to take biopsies from their bodies.

“It’s like a little cylinder that you get— basically a cross section of the skin and into the fat tissue” about the size of “the tip of your pinky,” says Laurence Dugal, a PhD candidate at the University of Western Australia.

But new research published in 2021 found another way to get at a whale shark’s genes—sidle up beside the beast and uncap a Nalgene bottle.

By collecting eDNA samples a few meters behind whale sharks, Dugal and her team obtained clear enough reads to determine individual sharks’ haplotypes, genetic markers that provide information on where its ancestors lived and its relatedness to other populations. They were a perfect match for traditional biopsies taken from the same individuals.

“I found it quite surprising that we were able to detect such a dominant signal from them in all this water,” she explains.

A flourishing subfield of eDNA is iDNA, or invertebrate-acquired DNA, in which “natural samplers” provide a handy shortcut for scientists.

Early studies on sea sponges have found they create accidental eDNA repositories as they filter-feed, while leeches contain a genetic record of their past blood meals that can last as long as four months. Researchers have also recovered species-level DNA from the guts of dung beetles that dined on other animals’ feces, including material from bearded pigs and sambar deer.

Tea leaves that tell the past

Researchers from Trier University and the Max Plank Institute in Germany brought their eDNA research close to home—perhaps uncomfortably so. In June, the team reported finding eDNA from 1,279 distinct species of insects, spiders, and other arthropods in teas and spices purchased in German grocery stores.

Green tea took first prize (or last, depending on how you look at it) with a mean of 449 species in each sample, and by extension, each cup of tea. The sample of parsley and chamomile, mint, and green tea contained eDNA from an average of 200 species.

The finding that eDNA is well-preserved on dry plant matter stored at room temperature unlocks a potential treasure trove of new data, the authors say. The historical botanical specimens collected around the world for centuries could contain as-yet-unexamined information on the species that surrounded them in life.

But the new discipline is not without drawbacks: Even eDNA’s biggest proponents say it’s a supplement, not a replacement, for traditional field sampling techniques.

So far, eDNA can’t reveal an organism’s age, sex, or body condition, and while recent advances have been made, it’s difficult to tell how many individuals are behind the eDNA reading for a species. We’ll need camera traps and old-fashioned in person observation for many years to come. And while sample collection can be fairly low-tech, contamination is a menace in both the lab and the field.

Still, it’s hard to overstate the sense of wonder scientists feel at the power of the technique.

“If you’ve ever been in a rainforest, you’ve seen all these nature shows and you know there’s so much life out there,” Bohmann says. “Then you get there and you hardly see anything. You have to sit really still, and if you’re lucky, you hear something jumping away. But with eDNA, suddenly you get this snapshot of what’s out there—this whole world of diversity opens up to you.”