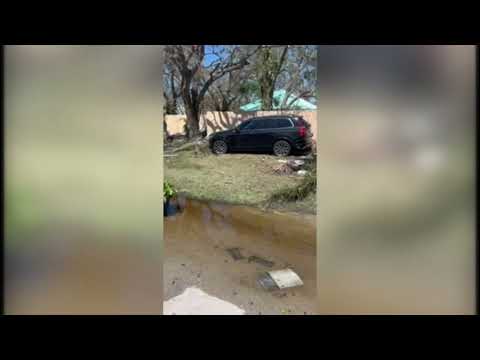 Former Batavians John and Joelle Lyman had just gotten settled into their new life at Fort Myers, Fla. by renovating portions of their home, making a sizable investment, and preparing to enjoy some sun, beach and relaxation.

After years of uprooting their lifestyles by downsizing and traveling to spend quality time with family, the Lymans had finally landed. Or so they thought. Toward the end of September, Hurricane Ian, with torrential winds and muddy waters, crashed into their serene world.

“We said, ‘OK, adventure time is over,’ it’s time to settle down,” John said during an interview from his current home in Naples, Fla. “We’ve been here for seven years, and we weathered Irma. And, you know, Irma gave us a false sense of security on the storm this time. I have been through a tremendous number of hurricanes … with this one, the warnings that came in came in fast. With Irma, it was really slow-moving. We had a lot of time to prepare and figure things out.

“Ian brought the fury,” he said. “It looked like someone filled (the house) with water, shook it with all of the furniture, and left it as it laid,” he said.

Hurricane Ian was a large and destructive Category 4 Atlantic hurricane, cited as being the deadliest hurricane to strike the state of Florida since 1935. Ian caused widespread damage across western Cuba and the southeast United States, especially the states of Florida and South Carolina.

As a paramedic and responder to several smaller hurricanes over the years, John thought he had seen it all — and was fairly certain that he and his wife could ride out this September storm as well. As fate would have it — or luck or whatever you would call it — their son Philip planned to visit Florida for vacation, and attend a concert while he was there. When the worst of the storm hit, the Lyman family was at that concert in Orlando.

“So we stayed in Disney. Amazingly, we were able to find a hotel, everything really was kind of closed down. And we did get hit there with like category one-ish. We were on the 12th floor and it was still pretty scary as category one. All the while, you know you’re thinking what’s going on with the house,” Joelle said about their home nearby Sanibel Beach. “You know what’s going on with the area because we’re so close to the beach, and you know the storm is 400 miles across.”

After learning of the deadly touchdown by Ian, the Lymans weren’t able to contact any neighbors because “everybody left,” John said. Ian moved automobiles, boats, trailers and dumpsters, and knocked down trees, wires, buildings, homes, the Sanibel bridge, and power. Nearly 150 deaths, including 136 people in Florida, and an estimated $50 billion of damage and loss was left in Ian’s wake. Fort Myers and Naples have reportedly been the most hardest hit, and millions lost power.

When the Lymans returned, John’s first thought was that their home wasn’t that bad. From the outside, despite some missing windows, and the wreckage and debris all around them, their place looked fairly intact, he said. First, they had to drive through a lot of water just to get to their place, and it looked like “an absolute war zone,” John and Joelle said, each filling in details for one another. In addition to power outages, the sewer system broke as well.

“So on top of the surge, there’s sewer water in our house. Everything was just absolutely ruined, windows blown out we had gotten on Monday, the Monday before the storm we just had the guy who sided our house a week and a half prior finish up by hanging the shutters. We just redid all the floors, furniture, a new wall, windows, doors. And the frightening thing is our insurance covers hurricanes, but a hurricane in their eyes doesn’t include storm surge. And we got hit with between seven and nine feet of water in our house,” John said, as Joelle added “So our plumbing, our electrical system, all of our storage, all of my kids, you know, stuff when they were kids, is all gone. It’s just devastating.”

The fridge was full of that dirty water, and furniture, appliances, clothing and other household items had been ruined by flood waters. But there were more emotional items, in particular, that got to Joelle.

“I can get another copy of a birth certificate, but there were baby books (in a storage container), and it was filled with water,” she said.

Recounting the danger of even fully inspecting their home, the Lymans said there could be unwelcomed visitors, such as alligators and water moccasins, and certainly, developing mold as the days go by. They aren’t allowed to begin any recovery and restoration until their insurance company and FEMA evaluate it and determine if, and how much, the Lymans will receive in compensation.

They’ve had to fill out paperwork, applications, and more paperwork, all in an effort to try and recoup some of their loss. But, in the face of seeing others living in tents, they feel grateful. A childhood friend of John’s has loaned them a fifth-wheel trailer in Naples until they can move on with their lives.

They have both managed to continue working — Joelle once worked in education at Genesee Valley BOCES and John had worked for Mercy EMS — and her current employer in Florida has set up a fundraiser for the couple to help offset some of the inescapable costs they will have. When they left for the concert in Orlando, Joelle had only brought a pair of flip-flops and some shorts and shirts. Their remaining world possessions stayed behind in their home, she said.

The couple isn’t certain just yet what they’re going to do. With the hope of getting some insurance and/or FEMA money, the Lymans haven’t made any solid plans. Their highest hope is to not have to use the Go Fund Me donations, and instead, they will pay it forward to someone else in need, they said. But right now, it’s hard to say what they’ll have and what they may need in the future.

“I don’t think we’ll be able to afford where we were,” Joelle said. “We don’t know what we’re going to do … You don’t feel rested. Your mind is always going.”

For more information about the fundraiser, go to John and Joelle Lyman.

Photos submitted by the Lymans of their home and surrounding neighborhood. The car was parallel to the house before getting pushed up onto the lawn, and boats were carried by the storm surge from other parts of the city.